in search of little olympus 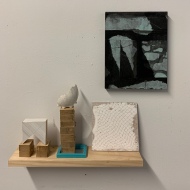 Assemblages from top left: jealousy (Athene and Arachne)   /  shame (Minerva, Juno and Venus)  / liberation (Athene, Nymph of the Sea)  /  all armed and grown up  /  in memory of Pallas

the work in three texts:

Homer’s Odyssey is the story of a man whose grand adventure is simply to go back to his own home, where he tries to turn everything back to the way it was before he went away. But time has moved on and like the Odyssey this work begins in medias res (in the middle of things).  The diamond (clarity?) that is hardly visible in the work – left dangling from a rope – reminds us that the body is under a constant process of renewal with its own (perhaps long forgotten) back-story which may never fully be known.

The ‘Ecstasy’ of little Olympus (p358 Ecstasy in The Nude: a study in ideal form by Kenneth Clark)

The phrase ‘little Olympus’ (coined by Walter Pater in his ‘Study of Dionysus’) serves as a reminder of the irrational in the work and in the body, those elements of human nature, the remnants of animal impulse that the Olympian religion attempted to sublimate or subdue.

The assemblage titles Jealousy (Athene and Arachne), Shame (Minerva, Juno and Venus), Liberation (Athene, Nymph of the Sea), all armed and grown up, in memory of Pallas, refer to various myths of Athene that sit outside Homer’s characterisation of the goddess as guardian and protector.  Once the triple goddess, Athene was later reduced to a duality of ‘maiden’ and ‘crone’, her central ‘nymph’ aspect suppressed.  An understanding of Athene that includes all her mythologies points towards a completeness that is able to accept many, often conflicting, narratives.  As such Athene offers a mirror up to the necessary conflicts involved in our own odyssey, guiding our journey home to a reunion with the self.