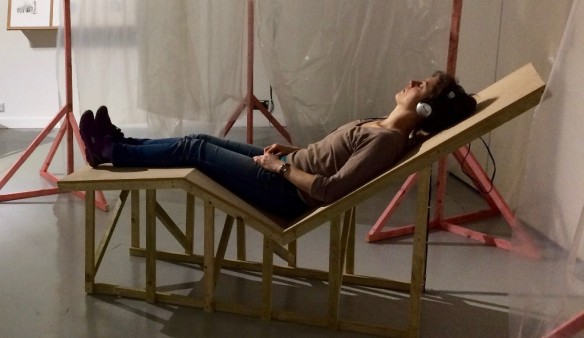 Narrative composition encoding aesthetic encounter, with dissatisfied reconstruction – a play between text and matter, models of the archaeological record.  Natasha Rosling’s Chamber asks questions about how and from where knowledge of ourselves is constructed,

Autopsy table or analyst couch?
Knowledge excreted and slippery
in performance, as in process
condensing temporarily (on plastic drapes)
Imperfect object, solidified and congealed
abject matter of perspective
Disembodied or disemboweled?
glossary:
models of the archaeological record:
physical – the direct result of physical processes (that operated in the past)
textual – encoding cultural information (about the past)
Patrik (1985) Is there an archaeological record?

Chamber: an archaeology of innards was written in response to Natasha Rosling’s performance event at Hardwick Gallery 16th November 2016 and as thinking material for the beneath(_) project