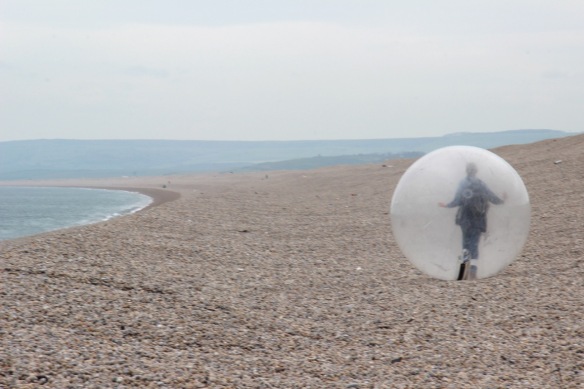 Weather Station is a project initiated by OSR Projects, a mobile pavilion for the collection of images, objects and ideas and an artist-led response to flooding and extreme weather, exploring the changing relationship we have with landscape and the natural world.  Regional partners  B-Side (Dorset), Backlane West (Cornwall), Exeter Phoenix (Devon), Hand in Glove (Bristol), Plymouth Art Centre (Devon), and Stair/Slide/Space (Hampshire) have selected artists to host the weather station and take part in a series of exhibitions and events.

Para(meter) has been commissioned in partnership with B-Side (Dorset) and will use the Weather Station to audio-record the phenomena of pebble sorting along Chesil Beach.  Measured and sampled by walking inside the Weather Station-come-trundle wheel and the requirement to stop for ‘fresh air’, durational audio recordings will attempt to ‘hear’ the erosion in pebble size, using the sphere’s micro-climate to separate pebble sounds from the predominant sound of the wind and crashing waves.

Refreshing an existing body of knowledge – Loophole, Tide Table, Piddock Range and ness -ness nest nestle net  – (re)assembled through repeated walks along Chesil Beach, Para(meter) aims to highlight the human impulse to separate and measure a constantly changing world, critical to our understanding of and reaction to climate change.

Weather Station (Part I) brought together new and existing work by OSR Projects associates Jethro Brice and Simon Lee Dicker alongside work by Alexander Stevenson (selected by Hestercombe Gallery Curator Tim Martin) in an exhibition documenting its journey so far.

Weather Station (Part II) will take place throughout the South West between February and June 2016. Cumulative rather than collaborative, the structure passes from one artist to the next, gathering traces of its journey through the streets, fields and rivers of South West England and gathering on Portland for an exhibition at B-side Festival in September 2016.